A Hallowmas Triduum of Departures

Have you had a good Halloween/Samhain/etc? Have all of the spooks and kooks been properly excised from your being, allowing with good energy?

I hope all of that has happened for once the spoopiness ended, the truly scary stuff began in Hello! Land. You see, barely a day removed from Halloween, the Hello! Project News machine began to spin.

The month began with an announcement regarding the upcoming December recital — and the additions/departures that came with it. Not only would we have three new Kenshuusei, but (for the purposes of this post): three would leave, them being Noguchi Kurumi, Hibi Marina, and Doi Rena.

Given that Noguchi was 17 at the time of her departure, it’s likely she decided to pursue a new path. Hibi and Doi are at a good time to continue their idol careers if they so wished, being 15 and 14 respectively.

Either way, I wish them all the best in their future endeavors. However, that is far from the biggest bombshell to drop from the triad of days that opened November.

The next day brought the announcement that Yanagawa Nanami would be graduating from Juice=Juice, Country Girls, and Hello! Project in March 2019. The reason for this is furthering her education for the sake of her new dream.

So shocked about the news of Yanamin 😭 wishing it was all a lie…
Looks like we will be having another graduation message album for Yanamin right after Harunan graduates.

When I first came across the news, it was morning in Devilsland and I was scrolling down Twitter. After a stomach in knots over the recent Direct (I missed about 30 mins of it and after a friend gabbed a bit about a half-genie, I spent a good hour looking for the plain Direct (the Treehouse bit was on) and then watching it in nervous agony trying to see what’s what. Nothing too special) and coupled with the knowledge that some Kenshuusei left (albeit I had to go out of my way to find out the fire to the smoke, similar to here), I was hoping for a more normal morning.

Oh, how naive I was. Bad news tends to come in multiples (remember when September was nothing but deets about Yossy’s scandal for weeks on end?) so of course things couldn’t be calm. After all, it wouldn’t be a good anniversary year without some chaos and Hello! Project has been a bit too calm/quiet for some people’s taste, especially after the All-Stars stuff.

As you may have figured out from my initial take (see above or here), I was saddened by the news (especially after finding out in a roundabout way), especially as it comes during a… time of deep reflection as of late. To quote a reply I made:

I’m actually afraid to share my feelings about things so far, especially since I’m trying to make a concerted effort to interact with fellow fans now (among other things).

…That feeling has been subsided by me reading Isilie’s rather heartwarming anniversary post and me joining a few communities the following day. It’s amazing how rejuvenating it is to interact with other H!P fans outside normal channels (especially Twitter)… which was well needed after…

…”has retired from the entertainment industry”…

Mitsui Aika will leave the entertainment industry. Her contract with UP-FRONT has ended as of today https://t.co/OtRj7Vu8iX 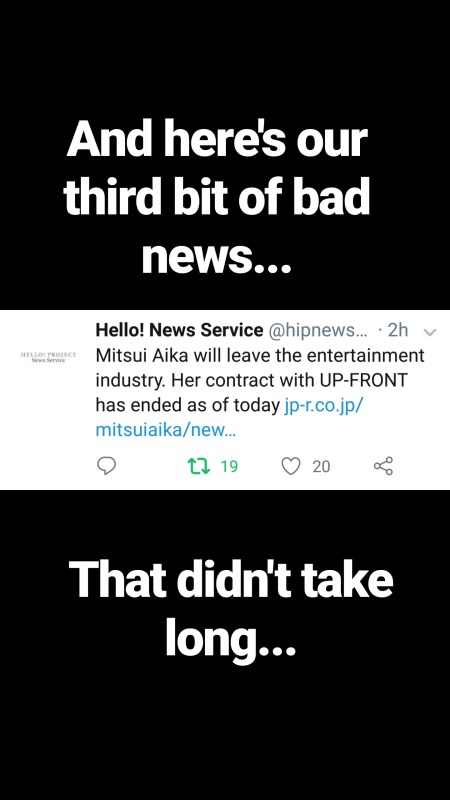 Given how quiet Aika had been on the front (she took a hiatus back in 2013 and 2016 to study English), this came as to no surprise to a lot of people. I had actually forgotten she was still signed with the agency myself — and I knew she would have a lengthy time away.

Either way, I wish her all the best. (This seems to be a running thread, isn’t it?)

(Also, in case anyone was curious about how Mitsii fared in the Momusu M3 Grand Prix, she was eliminated in the First Round by Ikuta Erina. So yeah….)

Sorry for the open-ended way this is… well, ending.

This entry was posted on Thursday, November 8th, 2018 at 11:00 am and is filed under Hello! Project. You can follow any responses to this entry through the RSS 2.0 feed. You can leave a response, or trackback from your own site.

One Response to A Hallowmas Triduum of Departures