As part of Hello! Project’s 20th anniversary celebration, I will take a look at various releases from the collective’s history. This one technically is also one of five meant to make up for the six weeks I went without a proper post in the first quarter, due to being busy with the Production Red Diary (among other factors).

As announced via a video announcement on Tumblr and Facebook (which was also seen in 20-second Stories snippets on Instagram and Facebook the day before), I decided to make reviews of the two Q2 ties and postponed the planned Ping Pong Pinpoint digest for a later date (probably one of the July slots). 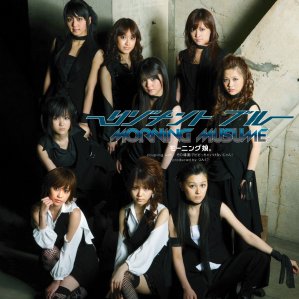 This week, we’ll be tackling Morning Musume‘s Resonant Blue. As this is in the late 2000s, we’re in the midst of the “Emo Musume” period where Momusu sang about practically nothing but “I’M SO LONELYYYYYYYYYYYYYYYY”! and “Everyone has ANGST!” (Given what this blog was originally about, it took everything in my power not to make a “Crawling” joke, something I took great delight in as I loathed that song with every fiber of my existence. Besides, I have something better in mind come the summer….)

…Anyway, Morning Musume’s output was marked by a more “mature” note with more introspective (and at times, angry) lyrics. One can trace one aspect of this to the success of singles like Kanashimi Twilight (which “had angrier lyrics than Shabondama”) and Onna ni Sachi Are (which was infamous for its line distribution, which can be attributed to the sudden departure of Fujimoto Miki a little more than a month before the single’s release). This was also a time when the 48s were really gaining steam and a lot of the idol names we know were just bubbling. (Momoiro Clover was formed a year after this single was released, eventually gaining and losing a member before turning into Z Fighters we know them as today… until Ariyasu Momoka left earlier this year.)

Point is Hello! Project was in a state of… abyss. Sales were rock bottom or close to it (as you can see from this spreadsheet used to seed the M3 Momusu Grand Prix) and public recognition was at a similar level. This also marked the duration of Morning Musume’s most stable lineup, which would be broken in 2009 with the graduation of the eternally controversial Kusumi Koharu.

If all of this sounds familiar (and given the end results of two unrelated polls, it should to a good chunk of you), then you may know that all of this is the textbook definition of what became known as the Platinum Era. Twas a time when Morning Musume were building up their skillset to compete with the juggernaut of the 48s (which has quite the pedigree), along with other idols and cultural factors. (Kpop and the overall Hallyu Wave were also making waves around this point. I can’t believe I forgot.)

This was also a time marked by Hello! Project’s overall efforts to expand into Asian markets, as shown by the addition of Chinese members Junjun and Linlin to Morning Musume, the formation of Taiwanese groups Ice Creamusume and Da Xiao Jie, and the sole H!P Korea member in the form of its sole Kenshuusei member. (As we are all painfully aware of, H!P’s competitors learned from their mistakes and missteps.)

Now that we’ve talked a bit of history, let’s dig into the third single of this brave new frontier and one of the winning singles of the Q2 Anniversary Review Vote, Morning Musume #36: Resonant Blue. Da ba dee da ba di.

As this is in the late 2000s, we’re in the midst of the “Emo Musume” period, featuring the triangle of Tanaka Reina, Kusumi Koharu (still riding the wave of her KiraRevo popularity), and leader Takahashi Ai. This… feels awkward, not only because… um….

Guys… if you lot complain about your oshi not getting lines (I know folks outside Japan rioted about Are you happy? and particularly the lack of Haachin in that and its other A-side)… it was worse. Kamei Eri, Niigaki Risa, Michishige Sayumi, figures we’ve grown to love and fawn over in later years (and are known for being vocal powerhouses — even if Sayu took a longer time to get there), are… I’m sorry, but looking at this now is… awkward. Eventually, the awkwardness will wear off.

…Anyway, the song has a moody, funky feel that is would feel like a throwback to Early Momusu (or just a continuation of a sound that is evocative of the group at this point). The funky bass, those horns, that sizzlingly broody mood of the song. It’s danceable, but evokes the loneliness that is “resonant.”

The lyrics are also more tense, full of a sadness that is almost jarring compared to its more lighthearted predecessor (but more in line with the tone of the season). It’s sensual (as the vocalizations from the other members add to that feeling) yet full of tension and frustration befitting the song. You feel the emotion, the loneliness, the sadness… you want to help them, help them, help them…. HELP THEM!

One thing of note is the not even the recurring “bakarashii” (since this was two singles after Onna ni Sachi Are, which repeatedly threw out the word “baka”). No, that thing is the cries for help. The recurring phrase is “HELP ME,” between the two-word phrase being uttered by the Holy Trinity at the end of each part of the chorus (which a Shabondama-esque shout from future leader Sayumi towards the end) and the second chorus verse ending with “tasukete dareka” (someone help [me]). As the feelings of solitude and loneliness reach a fever pitch, reverberating SOSes are sent out and become among the most notable aspect of this single.

(There’s a reason fans believe in a possible connection to the later Help Me!!.)

(Possibly epilepsy warning, due to the bright lights and flashing effects.)

Looks like I was right to think about Summer Night Town because like it (befitting its name), the MV is blue… ba da dee ba da di.

Anyway, the MV is marked by a dark mood. Momusu’s overall dancing space is reminiscent (to me) of frozen ice in a sea of water. Given the theme of “isolation” and “loneliness,” the girls being in a frozen tundra oddly works. Alas, this is probably shot in a studio set, keeping in theme with the gritty look of the covers… but with a lot more blue.

Seriously, the lighting gives everyone a tinge of blue (inside and outside). The “daring new look” featuring “smoky eye make-up” (as was mentioned on the Wikia) further adds to the look of maturity and sensuality. On top of that, combined with the DARKNESS NO LOVERS, the blue light bring attention to whatever splash of color is there.

This, of course, brings us to what was a major sticking point when this came out: the prominence of the Holy Trinity. You may have noticed that all of the members that weren’t Reina, Ai, Koharu are donning all-black outfits. All of the members that were had some white to their look. (Granted, the white is more subtle on Koha than it is on Reina and Ai, but it’s still noticeable.)

It was no secret that the three were very popular members on both sides of the Pacific… but it still caused a stir among the overseas fandom for the intense focus on them (at least, for the time being. Sure, it wasn’t SHOCK or Akai Freesia levels, but somewhat close. …Thank goodness for that). As we know from recent days, popular members tend to be (as TV Tropers call them) “Base Breakers,” dividing a fandom like a broken china plate.

(You know it’s bad when you liked 2/3 of the Trinity (at the time — these days, I still like one (being a former member of my all-time favorite H!P unit), am ambivalent to another, and… I have complicated feelings towards the third) and even you can get the resonant blueness (see what I did there?) of the overseas fandom.)

This is the version many fans preferred to be the main version for many reasons. Aside from lessening the sting from the Dance Shot-heavy main version (and the issues therein), one major point of praise was the fact it appeared have a plot (which automatically makes it good in the eyes of fans, at least at the time):

These scenes can be seen in their entirety in the alternate Lesson Studio and Night Scene versions.

While these scenes seem disconnected, one can make the argument that it connects to the theme of sadness and loneliness… in that despite living our lives in modernity, busying ourselves with whatever matters are at hand (or among friends), we are all still lonely. We all cry out for warmth and understanding, for love and comfort.

(I’m now reminded of some sad tales recently involving those who have “graduated” from our world. They had friends, family, even wealth and fame (things we often associate with “happiness”) and yet, they felt they could no longer stay among us. If you or you know someone who is feeling this way, know that help is around and your sadness won’t resonate forever.)

(As this single was released in 2008, it is not subject to the changes in sales reporting as implemented by Oricon in Fall 2016.

All figures reported in this section are from the Hello! Project Wikia with the percentage and average mathematics done by moi.

Of course, if a piece of idol music really touches you, does it matter that much how well it sells? It does to some people, which is one reason I do this…)

Within the sales brackets, Resonant Blue is among the second-lowest bracket.

…Blue are the feelings that live inside them.

Blue is a color with a lot of meanings. The most prominent (which is the main theme for this piece) is the meaning of sadness, of sorrow, of melancholy.

However, in the midst of all of this, I have neglected to mention a bit of color symbolism (which is extra blasphemous of me as an artist): blue can mean hope and happiness. It is not only the color of melancholy, bringing forth the “blues” of sorrow, but of serenity. It is the color of a sunny sky, bringing hope, happiness, and heartsease. It is the color of oceans (unless they’re severely polluted), evoking images of relaxation and paradise.

Yes, our subject is in a state of frustration and sorrow, but there is hope in her voice:

She’ll feel that kindness someday (or she’ll cry about it). We all should, really. Life’s too short for our sadness to resonate louder than any sonic boom.

Tune in next time as we look at the other winner of the Anniversary Review Poll for Q2: Buono!‘s Kiss! Kiss! Kiss!. Yes, we’re ending it with that trio again (and hopefully, it is less blue—inside and outside—than this).

Until the Next One!
— Magi-Kat

This entry was posted on Thursday, June 7th, 2018 at 11:00 am and is filed under Hello! Project, Morning Twilight. You can follow any responses to this entry through the RSS 2.0 feed. You can leave a response, or trackback from your own site.