CONGRATULATIONS on Your Happy Summer Wedding! 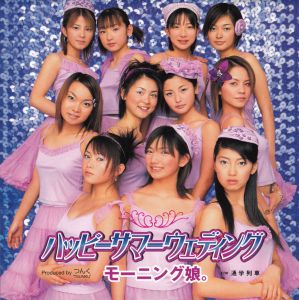 As part of Hello! Project’s 20th anniversary celebration, I will take a look at various releases from the collective’s history.

In this post, we will take a look at the representative for 2000: Morning Musume’s Happy Summer Wedding. (This is rather fitting, given the recent news regarding last week’s topic.)

This one has a bit of a personal significance to me. While Go Girl ~ Koi no Victory was my “gateway” song into the H!P fandom (for a flimsy reason) and said song that marked the beginning of my days as H!P fan, I had actually tried to get into H!P about a year earlier using this song. (Oh, and The☆Peace too, but I didn’t even listen to that one until I became a bona fide fan.)

It’s weird admitting this, especially since they’re among my favorite songs now and they are considered classics. Plus, this was the debut of the 4th Gen, half of whom are my all-time favorite Momusu members and went on to form my all-time favorite H!P unit. Heck, the entire 4th Gen rocked.

With a hearty “CONGRATULATION,” the song opens its doors to the listener with an opening melody punctuated by cheers of “Ai!” The verses themselves are punctuated by happy “Pala”s. (Get used to the aforementioned chants, they’re essential to the song.) The chorus is devoid of these embellishments, bringing an increased focus to the song’s subject and theme: a girl/woman showing gratitude to her parents as she has found the man of her dreams and presumably prepares to walk down the aisle. (It is not helped that had finished watching Wedding Peach DX at the time of writing this.)

The vocals are solid and appropriate for the mood, making you smile from the cheer.

Going with this, the music carries on that sense of fun that has come to define Morning Musume during this era. It is a Middle Eastern/South Asian-flavored piece, almost Bollywood-esque in presentation. (Oddly appropriate given how Indian weddings are known to be beautifully theatrical at times.) The “Golden Era” feel is accentuated by the presence of DANCE☆MAN among the production crew, something that will tie into the next #MemeMay post. All of this may seem a tad repetitive given that the previous single had a similar musical theme, but it’s handled in a more “brighter” mood than it.

Like the song, the MV carries the festive theme with a Middle Eastern/South Asian flavor, giving off a Bollywood flair. It has two primary scenes: a grand hall with a tent-like ceiling and a blue room with beaded curtains. A good majority of the MV is staged within this greens thaterical room with Morning Girls primarily in South Asian costumes. (This is no doubt to go with the festive atmosphere and “happy wedding” theme.) Some solo lines have them in the purple garments on the cover (gotta tie in that cover art, after all), but the main thing is getting into the mood.

The other scenes that are in the Blue Room have the members in more casual outfits. Their dresses more resemble the cover art, but they’re still in various colors and staying with the mood.

All-in-all, like a true music video should, this single’s MV illustrates the sentiment and the theme of the song.

(As this single was released in 2000, it is not subject to the changes in sales reporting as implemented by Oricon in Fall 2016.

All figures reported in this section are from the Hello! Project Wikia with the percentage and average mathematics done by moi.

Of course, if a piece of idol music really touches you, does it matter that much how well it sells? It does to some people, which is one reason I do this…)

It was fascinating going back to this one. As we all know, “Happy Summer Wedding” (much like the life event in its title) marked a new chapter for Morning Musume, Hello! Project, and even J-Pop as a whole. Sure, LOVE Machine was the group’s big break and the dawn of the Golden Age, but this single marked the solidification of a collection of classic characters we know today. Just about everyone from this lineup and afterwards (yes, even then-graduate-to-be Ichii Sayaka, in her own way) are now among the most well-known Morning Musume and Hello! Project members of all-time.

To this day, the song is performed at the weddings of Morning Musume OGs, a tradition that wouldn’t be out of place for Manoeri and her future hubby. CONGRATULATIONS!

As a new day, a new century, a new phase dawns… take heart, dear hearts. The road to love is long and bumpy, but it’ll be sweet in the end. To say “love conquers all” may seem a tad cliche or passe, but without love, why look to the future? Without love, without a heart filled with positive hopes for the future, how can one go on towards the horizon?

Live each day with love, friends, and may you do your best on anything. Happy!

See you in the future! After all, before a Happy Summer Wedding comes a Chance of LOVE.

Next Time: A Melon-Flavored Carelessly Whispered Chance of LOVE
Coming Up on #MemeMay: A Leafy Explosion of YATTA!

Until the Next One!
— Magi-Kat

*On that note, consider the tournament officially open as of this post. The “normal” voting period will last until the end of May. Gotta have a baseline for those Twitter polls, after all.

This entry was posted on Thursday, May 10th, 2018 at 11:00 am and is filed under Hello! Project, Morning Twilight. You can follow any responses to this entry through the RSS 2.0 feed. You can leave a response, or trackback from your own site.

3 Responses to CONGRATULATIONS on Your Happy Summer Wedding!